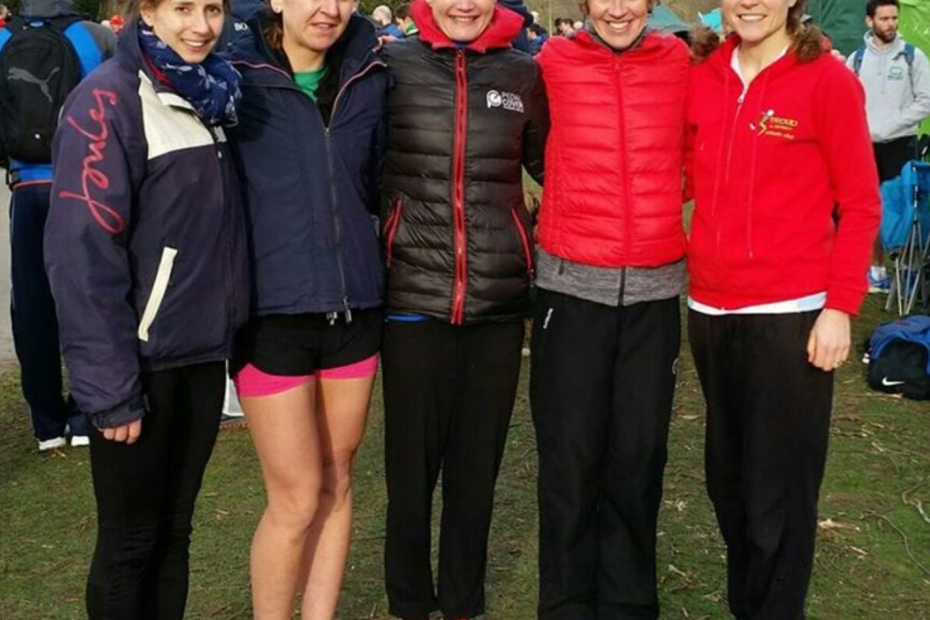 The Stroud Juniors had a successful day at the Midland Counties Junior 5k road running championships at Sutton Park, Birmingham ahead of the senior road relays which Stroud had entered a both a men and women teams for the first time is many years.

The Sutton park course also hosts the English National Junior 5k championships each year in April. The highlight of the 5k races was Lexie Bull winning the U15 girls race and leading the Stroud U15 girls to the team gold medal. Lexie reduced the course record set last year at the national by 14s with her time 18min 51s, and now has an automatic place in the English National on the 6th April.

The U17 ladies only just got a team out and were not all fully fit but they ran brilliantly for the team silver medal, with Merryn Hilton finishing 4th and Grace Tavner finishing 5th.

An inexperienced U13 girls team tackled the 5k course with great confidence from the start and only just fell short of a team medal in 4th place.

Jane Wassell got the ladies off on leg 1 which was the long leg, covering 5.33 miles in 34.15 on this this challenging course in 15th place.

Gwen Kinsey on third leg (long)  had a great run and gained a further place in a time of 33.43 to move the ladies into 10th place.

Kathryn Brook on 4th leg (short) ran a solid race in a time of 22.32 and the ladies are in a good position in 13th place.

New member, Kimberley Newcombe on 5th Leg (short) produced a fine performance in a time of 20.04 to gain a further 2 places.

Heidi North on Leg 6 (short) who came into the team at late notice also produced a great performance to gain a further place in 20.11 and bring the team home in 10th Place.

After a lengthy absence last weekend saw the return of the Senior Men to the Midlands Road Relay. With 3 of the fastest team members having to drop out in the week before the event we had Alan Pitt, Michael Stevenson and Daniel Brook to thank for filling up the final legs at the last minute.

Early on Saturday morning a minibus left Stroud heading for Sutton Park, the venue for the event and having arrived in plenty of time for the 1st race managed to get a great spot for the club tent on the finish straight.

The course was an undulating 3.16 mile short leg with the long leg coming in at 5.4 mile run by the 1st 4 athletes. As quite a few of us had not run here before we took up Alan’s offer of a guided warm up run with sage advice being handed out at various points on the way round. With the late changes to the team and a mixed age group our expectations of qualifying for the Nationals was almost non-existent, you needed to be in the top 25 teams to qualify, and we were hoping for a top 50 placing – 76 teams had entered.

As 12:00 o’clock approached, the start time for the 1st leg, Ian Newns was warmed up and was looking forward to the most competitive leg of the whole event, a mass start of the 70 odd Senior Men.  It proved to be as competitive as expected and made more so when Ian took a tumble in his enthusiasm to get round the turning cone a bit to quickly, but a great performance against very strong competition put the team in 40th place.

Michael Stevenson, having stayed on after Alice had run her race earlier in the day, then completed his leg before we let Jack Turner loose who set off like a cheetah to run down any runner who he could see.

The last long leg was run by Darren Jewell who had stepped up from a short leg to take on one of longer legs but with his experience the distance was not a problem.

Daniel Brook, who had only traveled up to watch Ruby race in the U15 girls, was next out of the cage for our 1st short leg – there is actually a cage where runners wait for their team member to approach the finish before being allowed out onto the track to start. Dan then went on to run the Weston Half Marathon on the Sunday so we were really pleased with the massive effort he put in for us. This leg turned into a mini Stroud motivational leg as Kim Newcombe started her leg at the almost the exact same time as Dan and so they had the chance to push each other round with Dan just holding on at the end to finish ahead of Kimberly.

The next of our younger athletes then set off, Thomas Bury who set a great pace and grabbed a couple more places for the team. Jason Barry one of the more experienced road relay runners followed and another great performance saw him post the fastest 5km time of the day for the team at 18:33.

Ian Cutler took on Leg 8 and was competitive with a time of 18:43 only 4 seconds outside his 5km PB and held onto 36th place.

With Nick Hitchcroft followed by Alan Pitt we used our experienced runners on the next 2 legs to grab a few more places and so by the time Jerome Boyd set off we were sitting in 35th place.

Jerome ran a strong leg and finished just before the final Mass start for all final runners took place. Each year once the 8th placed team has finished then a mass start for all remaining runners occurs so that the event can close at a sensible time.

This meant that Simon Fortnam had the opportunity of a proper start and a hard race ahead. As expected, Simon put everything into the leg and gained 2 more places for the team.

Overall the team finished in 32nd place way above our initial expectations and all the team should be really pleased with their performances. Out of 76 teams entered, 56 teams finished – 2 were disqualified for fielding ineligible runners and 13 teams failed to set out the required 12 runners with 5 no shows on the day. 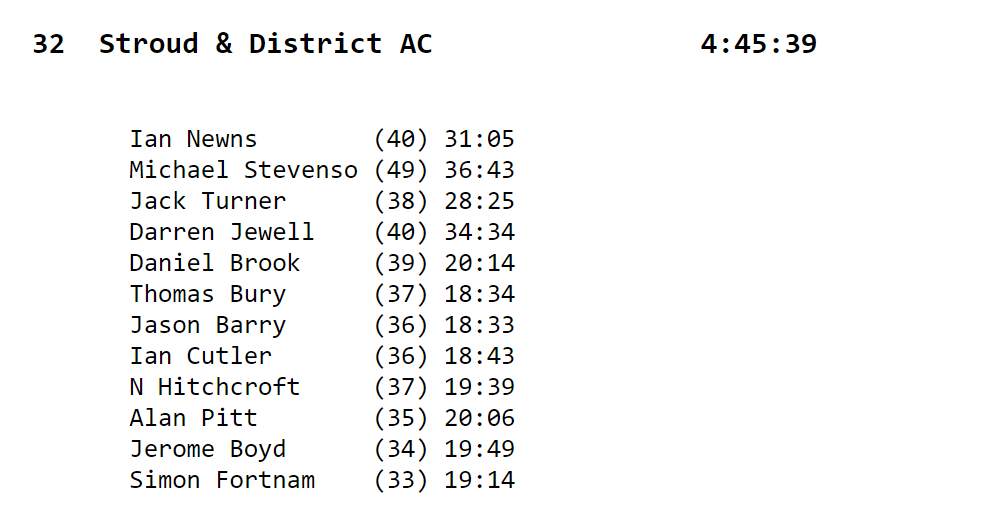 The event itself was something completely different from any race I have been involved with in the past, it had a fantastic club atmosphere with almost constant cheering on the straight as any runner, whether they were at the front of the pack – the race was won in 3:55:33 by Bristol & West AC (Birchfield Harriers were only 13 seconds behind them) or towards the back of the pack as all clubs were supporting each other. I would strongly recommend this event to any of the club runners who want to test themselves against the best in the South West. We will be entering the 6 Stage Relays in September where the aim must be to qualify for the National Road Relays – we would love to see you there.

We need to improve at taking club team photos as it was only at the end that we realised we hadn’t taken the money shot so apologies to Jack, Ian and Michael who had already gone by then.